Prayers for my Aunt Judy

Things have been a little crazy around here this past week.  My Aunt Judy became deathly sick with severe back pain which led her to the ER.  After many tests, they thought she had diverticulitis and admitted her to run more tests and to keep her under observation.  Pain meds were given and she began to feel a little better.  More tests were scheduled for the following day and while my Mother and Uncle were with her awaiting them, she began to slur her words. My mother alerted the nurse and the first thought was that it may be from the pain meds.  Thankfully a cancer nurse had come in and checked her right arm which was paralyzed and got things moving STAT.  They were able to administer the clot busting medicine and got her stable in time.  The CT scan showed that there was no major damage to her brain (Thank the good LORD) and she was able to speak(softly).  She knew who my Mother and Uncle were afterwards but said that her right side was numb and her back hurt.  Family has been with her around the clock and she is showing more and more positive signs.  My husband and I saw her wiggle her right toes a few times and I saw her jerk her right arm as a nurse hurt her while trying to put in an IV.  The nurse then said that was a GREAT sign!

Please keep her in your prayers.  If you all may remember, while I was in the hospital on life support 3 years ago, she was by my side.  When I woke up, she told me about all that had happened and how she pleaded the blood of Jesus over me and spoke peace and claimed healing for me.  I remember thinking that if anyone was to be with me, that I wanted it to be my Aunt Judy along with my husband.  The two of them took care of me and after I came home, Judy was right there with me again along with my Mother. 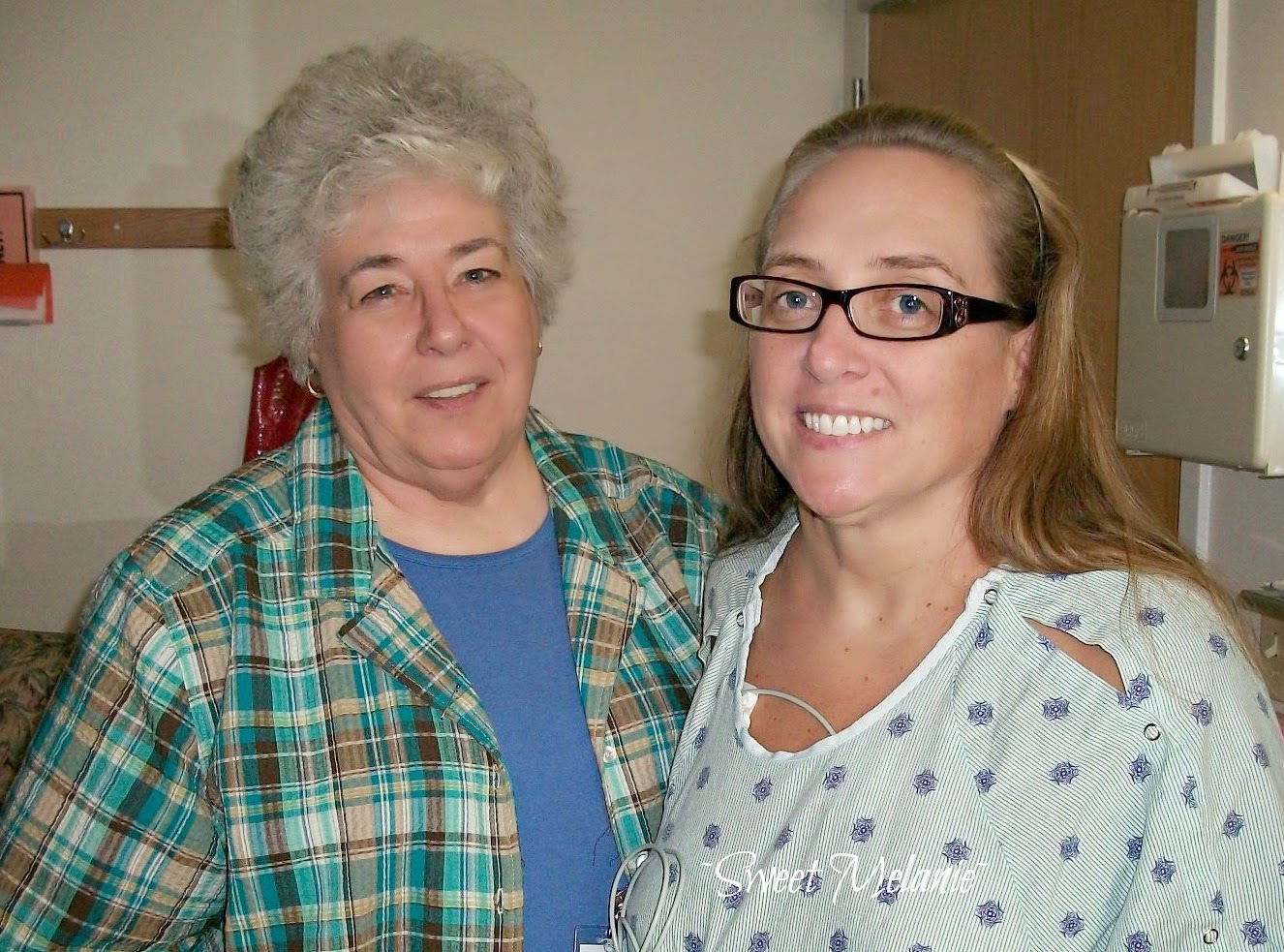 Judy helped raise me so instead of calling her Aunt Judy, I called her Judy.  We all call her "Dooder" for short when we are having fun.  She taught me all about God, took me to church and to Bible school.  I spent most of my days with her and her family so we were more like brothers and sisters instead of cousins.  I remember one day as she was driving, she asked me what color I thought was God's favorite color.  As I looked around I said green....she said she thought blue because of the sky.  I never look at the sky without thinking of that moment.

Not quite a year later,  Mammaw had a stroke and then passed away.  We were all devastated and with it being so close to Christmas, we decided to have Christmas at Judy's home. 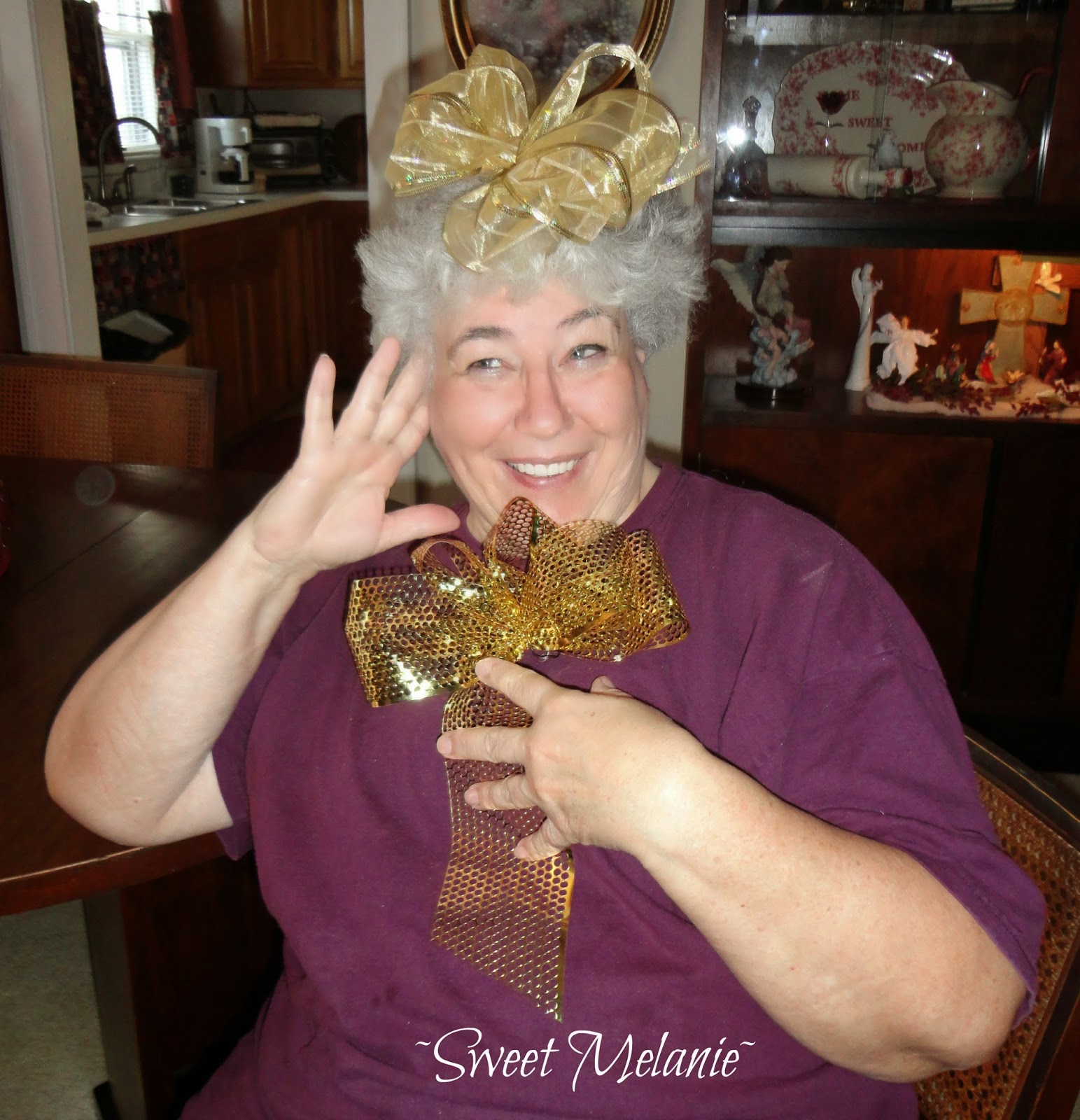 We cried but then as Mammaw all taught us, we began to have fun and laugh playing with some bows.
We all say that she just sparkles...and she does!  She has taken care of many people and has been there as they have taken their last breath.  Her spirit is so loving and giving, always has been a hard worker and loves to joke.
I love my Aunt Judy more than anyone could possibly understand.  So if you would, please keep her in your prayers and agree with me that she will be blessed with a long and healthy life and will regain what was taken away. 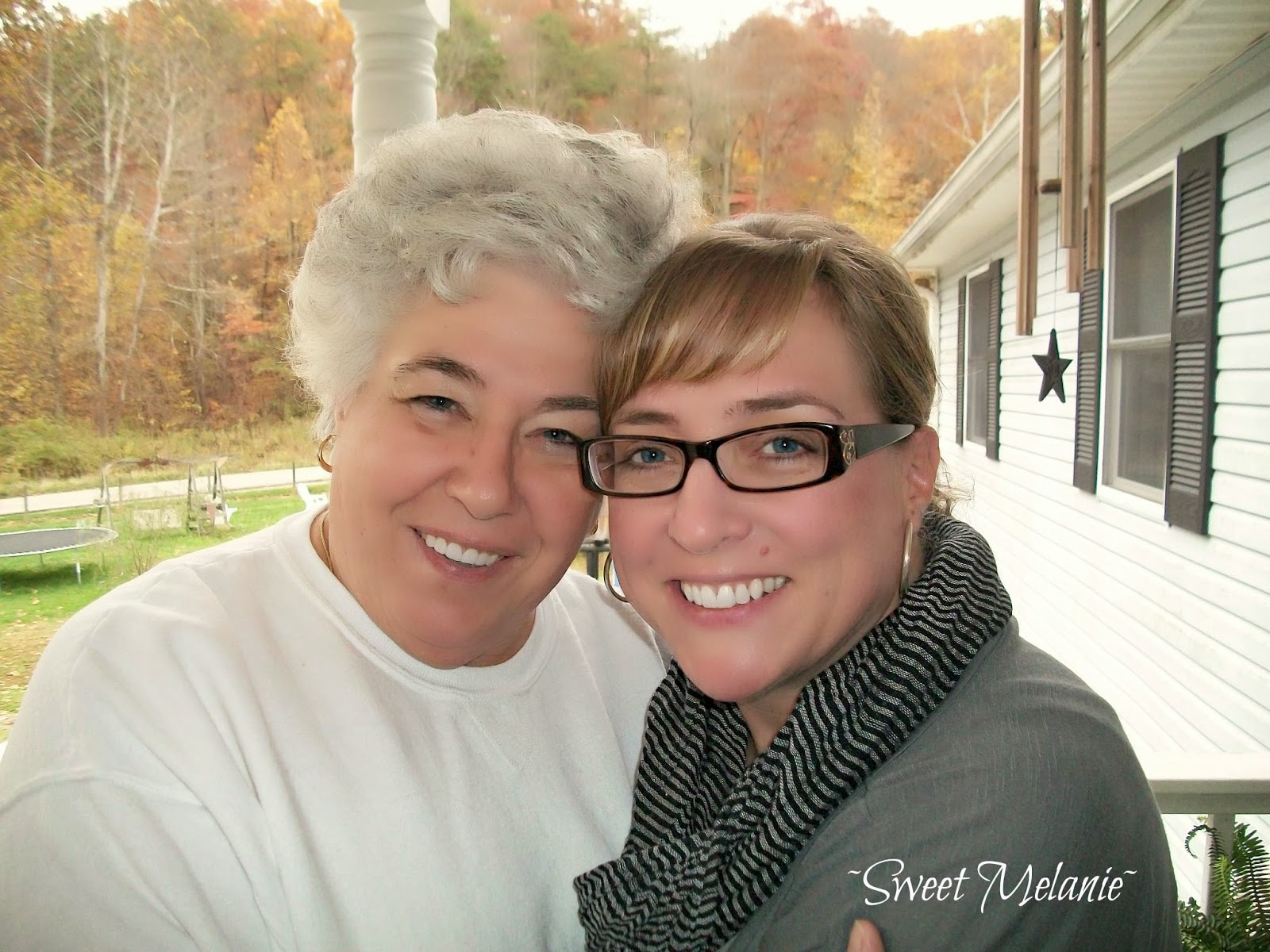 I could write a book about my life with her...she is truly a wonderful woman and if I haven't said it enough....I love her dearly!

Thank you so much for stopping in...I love hearing from you! Hugs, Melanie

Sweet Melanie
Hi, my name is Melanie. I am a stay at home mom who has two of the most beautiful daughters a mama could ever want(every mom says that, right?) and a wonderful hubby that actually lets me do whatever I want when it comes to decorating. As long as he has a comfy place to be and a full belly, then he's good to go. I grew up in a small town and loved it. My "Mammaw" had a huge part in raising me. She taught me some very important things....always be nice, have a relationship with and love God, and be the very best mom and wife I could ever be. Of course there is more, but then I'd be writing a book. I am so very blessed to be here and have what I have. My wish is to share my loves and passions with you...hope you all enjoy.